This is the sermon I preached on Saturday 18 May 2019 at a special service for the Society of St George. The service was held at St Andrew's Wraysbury because their founder, Howard Ruff, lived in Wraysbury and is buried in our churchyard. People were kind enough to say they found my talk helpful, so here it is...

I was recently in Winchester for the first time. Winchester is the capital city of Alfred the Great. What a man! If any one individual has earned the right to be considered the founder of our nation, it's Alfred. He was
• a warrior leader who turned back the Viking invasion
• a lawgiver creating the bedrock of our legal system today
• the founder of the British Navy
• a man tested by setbacks and adversity
• a devout Christian who had the Bible translated into Anglo-Saxon

Sadly though Alfred would never have made it on to the Great British Bake Off! But what a legacy - a profoundly Christian legacy which set the course for our country for the next 1,000 years. There have been many ups and downs and social upheavals along the way. The industrial revolution for example took millions off the land of their birth and enslaved them to machines, creating the underclass so graphically portrayed in the novels of Charles Dickens. For far too long we profited from the wickedness of the slave trade.

But again and again reformers dedicated to that Christian legacy rose up, for example The Earl of Shaftesbury who stopped children being sent down mines, Josephine Butler who ended child prostitution on the streets of Victorian London, or William Wilberforce who campaigned all his life, and finally succeeded, in outlawing slavery. They were motivated by their passionate Christian faith. If you don't know who these amazing people were, Google them! Find out – they are part of your heritage.

The roots of English culture are constantly to be found in our day to day language. When we describe a decent person as "the salt of the earth," when we tell a shy person not to "hide their light under a bushel," when we advise someone to "turn the other cheek" or "go the extra mile," when we refuse to "cast our pearls before swine" and watch out for "wolves in sheep's clothing" or throw doubt on an impractical scheme as "building on sand" we are quoting from one single passage from the Bible – the Sermon on the Mount, preached by Jesus. There are literally thousands more in other parts of the Bible. It's the Bible that forms the bedrock of those English values.

So many of the things that underlie our society's assumptions come from the Bible. Our espousal of tolerance – "live and let live" is the English motto! – comes from the command of Jesus not to judge others. The value we set on individuality comes from the Bible's teaching that every human being is made in the image of God. Our championing of the underdog, our love of freedom, our dislike of hypocrisy and our sense of fair play are all drawn from Biblical values… Or they were.

When the government decided that British Values should be taught in schools they produced a list: toleration and respect for others, democracy and the rule of law, all good stuff but no mention whatsoever of two thousand years of Christianity in this country. In other words they cut off English values at the base. They wanted to enjoy the fruits of English values while destroying their roots in the Bible and in the lives of the countless inspirational people who were motivated by its life-transforming power. Because without the support of a transcendent narrative, values have no staying power to sustain us. They are simply a matter of people's opinions or even of fashion. And who is to say that one person's opinion is any better than another's?

The dropping of Christianity from our educational system in my view marks the point at which government committed itself to a secularising programme. Yet this secularisation of our value system has a very high cost. That cost is largely paid by the younger generation. We have unprecedented levels of family breakdown, in spite of research that shows that every measurable outcome for the children of broken homes is worse than for those who stay together. I feel scared as a parent and grandparent by the huge and rising levels of self-harm among young people, the terrifying rate of suicide among young men in particular, by twitter storms full of rage and hate, sometimes perversely whipped up in the name of tolerance, by our obsessions with our body image, with what we eat, with how many people like or follow us.

Has the absence of a framework of values left our young people in a position where they no longer value themselves? Is secularism actually bad for you? Can you keep on telling people that we are just animals in a random universe, that there is no point looking for meaning and purpose in our lives, without destroying their soul? How can we say every child matters when we have no ultimate basis for saying anything matters?

You see our values don't come out of a vacuum, they arise from a narrative: that God the Creator of all made us in His image, to share His glory, because God loves us; that we messed up really badly and filled his world with greed and hate and hypocrisy and violence and all the other things so depressingly familiar to us from our daily news; but that God loves us so much that He was even ready to die on a cross to restore us to sanity and to Himself. The meaning of this narrative is that every human being is of infinite value to God, and from this value all other values spring. That is the story I believe our nation needs to hear all over again if it is to find any kind of moral compass, and I am pessimistic about our future if we don't. And that is the story I will tell until my dying day. Amen. 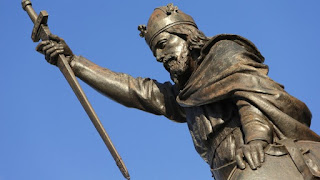 The statue of Alfred the Great in Winchester