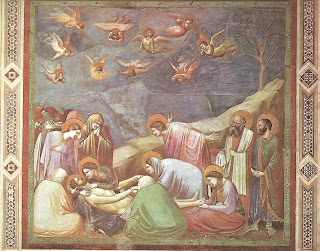 It’s dark again! This time because it’s evening. There’s been an unseemly rush to dispose of the bodies of Jesus and the two criminals crucified with him before sunset, which marks the start of the new day in Hebrew chronology. The next day would be the Passover Sabbath, the holiest of days, which could not be profaned by touching a dead body.

·       Tenderly holding Jesus’ feet we find Mary Magdalene again, as she was found at the feet of Jesus only days before when she anointed them.

·       All around are the other disciples. Some are saints and have haloes, others are just ordinary people who love Jesus and want to be near Him even in death. Look how the women in particular take his hands in theirs, cradle his head, gaze incredulously into His unseeing eyes wondering how it could even be possible that the Lord of life could have died. Every face is contorted with grief at that particular stage where you just can’t believe it could possibly have happened…

·       This is a picture for everyone who has ever been bereaved, telling us with enormous eloquence that God understands, He has been there, for God too is present grieving over His Beloved Son.

·         The angels above them, with their contorted faces and postures are grieving too. There is a sort of paroxysm going on following the death of Jesus which affects the whole cosmos, human, natural and divine.

·       For nature too is grieving. Look at this bleak, lifeless, almost formless landscape. It calls to mind the beginning of Genesis when it tells us the earth was “waste and void.” This is highly significant for it indicates that the pattern of Jesus’ time since he entered Jerusalem a few days before has been following the way of the Creator of Genesis. He enters Jerusalem on the first day and sets about the work of ministry, as God does the work of creation over five days. On the sixth day God creates humanity: on the sixth day Jesus the Son of Man is destroyed. On the seventh day God the Creator rests, and thus calls into being Shabbat: on Shabbat Jesus rests in the tomb, his terrible work completed. But after that rest, Jesus rises and with him the world is re-created.

·       The rockiness of the landscape also calls to mind the rocky cave where the body of Jesus spend that epoch-changing Shabbat.

·       Finally, there are two more figures, bottom left, in green and white, with their backs turned towards us. Their positioning is odd because they block our full view of Jesus. They are like actors who upstage the main action by standing in the wrong place. They are ordinary people, they have no haloes… What are they doing there? Surely they are there because they represent us. In them, Giotto invites us to come and be part of this picture, to sit with Jesus and grieve, to share in the experience of His death - so that we may also share in His coming resurrection.