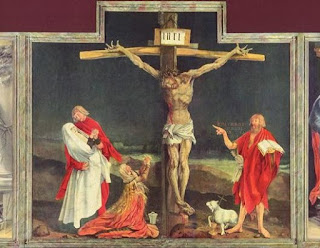 ·         It’s dark again! This is because of the Gospel writers’ statement that “At the sixth hour darkness came over the whole land.”

·       So who are these various figures standing around? They are not the mob of Bosch’s painting, nor the Roman soldiers and the Pharisees of the Gospel accounts. Even the two thieves crucified with Jesus have been stripped out. Grünewald wants us to focus firstly and fundamentally on Jesus himself, and then on just a handful of figures in the way they react to his crucifixion.

·       On the left is Mary Magdalen, always identifiable in Christian iconography by her beautiful flowing golden hair – a prostitute redeemed by Jesus. By her side is an alabaster jar, a reminder of the costly ointment she poured on Jesus’ feet just a few days before: but also of the jar of spices she would later bring to anoint Jesus’ body on the day of resurrection. She gazes despairingly into the stricken face of Jesus…

·       Mary the mother of Jesus is uncharacteristically dressed in white – she is normally shown in a blue robe. Is this a shroud she is wearing? She identifies deeply with Jesus in his suffering and death. As Simeon prophesied long before when she brought Jesus as a baby to be dedicated in the Temple, “And a sword shall pierce your own heart also.”

·         Tenderly cradling Mary is John the beloved disciple. This is in reference to the words of Jesus from the cross, thinking not of himself but of other, in the same way that he says, “Father forgive them, they don’t know what they’re doing,” so he also says to John, “Behold your mother,” and to Mary, “Behold your son.” Among the many other meanings of the cross is the message that we should show compassion to one another as God shows compassion in Christ to us.

·       On the right is John the Baptist. What’s he doing here? He’s supposed to have been beheaded perhaps a year before. Grünewald knows this and shows John in red, for the blood of the martyrs. It’s because John prophesied, saying of Jesus, “behold the Lamb of God, who takes away the sin of the world.” And there is a lamb by John’s feet. There is blood coming from its side and falling into a chalice – the blood of Christ shed for us. John is there to remind us that the cross is the fulfilment of prophecies such as Isaiah 53 or Psalm 22, and also the fulfilment of the Passover Feast with the central act of the slaughtered lamb and its saving blood from Exodus.

·       It is Jesus himself though who is absolutely central. He is larger than the other characters and totally dominates the picture. This is a desperately confrontational painting. Jesus and his agony are right in our faces, demanding to know how we will respond to such graphic suffering. It is personal, it matters what we decided about him.

·       Jesus’ body is twisted in the throes of his last agony. His skin pocked with the savage marks created by scourging with Roman whips, which had pieces of metal embedded in their thongs to inflict maximum pain. Take a look in close up. His mouth sags open, his head is hanging down in utter exhaustion. Unlike the polite tricklings of some artists, there is much blood, from head, hands, side and feet. And just look at those hands, cruelly contorted, beseeching the darkness. Here is the cruellest crown of thorns in any depiction of the cross.

·       This then is crucified servant of Isaiah 53, who was “marred and disfigured beyond human likeness…” This is the agony of Psalm 22 - “I can count all my bones… they pierced my hands and feet…” – in which Jesus cries, “My God, my God, why have you forsaken me?”

·       Grünewald has portrayed Jesus as the one who has spent himself utterly for you, who has given everything in love until nothing is left. Now how are you going to respond to him?