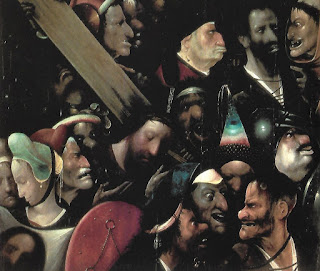 • Darkness! Bosch’s background is inky black, a reflection on the darkness of the cross, spiritual as well as physical.

• Faces! Every kind of face, but with a few exceptions, most of them twisted to reflect moral deformity of various kinds: cruel, arrogant, sneering, angry, malicious, pompous, hypocritical, greedy, fearful, snarling, gloating faces. Are these possibly the seven deadly sins? Are they possibly us – those for whom Christ died? For Jesus is being led out to die, not for the righteous, but for sinners…

• The face of Jesus is right in the middle. At first he seems just one among the seething hubbub, lost in this dark eddy of humanity. But then look at his expression, so different:  Patient, humble, submitted to the task He must carry out, calm in the midst of rage.

• Jesus’ face is picked out by the beam of the cross, a great diagonal scything through the mob. Somehow a light seems to be shining along it, gently illuminating his serene expression. The cross that brings such darkness to Him will nonetheless bring light to us.

• Simon of Cyrene is above and behind Jesus, his hand and chin lifted in the act of taking up the cross. Cyrene was in Libya, and as an African Bosch as depicted him as a black man. Jesus commanded His followers to take up their cross – the first person literally to do this was black.

• Two other black faces either side of Jesus may be Simon’s sons, Alexander and Rufus, who are named in Mark’s Gospel. The reason for naming them must be that they were known to Mark’s readers. Bosch is referring to the eye witness dimension of the Gospel’s account.

• St Veronica is positioned bottom left – you can see she is holding a cloth with yet another face printed on it. This is the legend that Veronica saw Jesus stumble as he was carrying the cross and came to him to wipe his bleeding and sweating face. The image of Jesus' face then miraculously appeared on the cloth she used. Though not described in the Gospels, the story echoes a Gospel truth, that we are all called to bear the image of Christ, to grow into his likeness, and that we cannot do so unless we walk in the way of His cross. Bosch indicates this by showing her face in the same posture and with the same calm, inward expression as Jesus’ face: and a similar light falls on her face as his.

• The two thieves crucified with Jesus are shown at bottom right and top right. Both are being taunted, one snarls back at his tormentors, but the one at top right is grey with fear at the ordeal he is to undergo. He becomes the penitent thief, the one who turns to Jesus at the last extremity: “Jesus, remember me when you come into your kingdom:” “Today you will be with me in prardise.”