The enemies of faith seem to think it's OK to trash Christianity as a fantasy for gullible morons. So I think it's time to redress the balance. I wish my fellow Christians would be a bit more forthcoming in making our case, but we all seem to have swallowed the view that it is somehow offensive to assert that Christianity might actually be true. Consequently we censor ourselves. However intelligent people have some very reasonable grounds for believing. There isn't time to cover them all in one little blog post so I'm doing a few at a time.

So let's start with the classical proofs for the existence of God, basically as codified by Thomas Aquinas in the 13th century. There is a good if complex discussion of these on Wikipedia at http://en.wikipedia.org/wiki/Quinque_viae. They have been under a lot of fire from angry secularists for some time, and there is justification for some of the faults they allege.

The word "proofs" is the first problem. They are clearly not proofs in the current sense that they demonstrate the existence of God as a mathematical certainty. They are more like proofs in the publishers' sense: though they may invite correction, they define a field for debate. Thomas Aquinas himself used the word "ways." I'll stick with arguments.

I start by weeding out the weakest one. The argument from degree I find unconvincing. Most of what we experience comes in relative degrees, say from hotter to cooler or wetter to drier or nicer to nastier. There must be some sort of absolute standard to which these are comparable and that absolute to which all other things are relative, says Aquinas, is God. However this doesn't seem so obvious to me.
·         First most absolutes seem quite hard to establish. It has been established that there is a temperature of absolute zero, for example, where there is no energy whatsoever left in a system. Unfortunately absolute negatives are easier to fix than absolute positives: how much heat would there have to be in a system for it to count as absolute? I am pretty sure it would be possible to create absolute dryness, for example, if only in a test tube from which all molecules of H2O have been excluded. But what would absolute wetness be? I suppose the moment of the big bang might have contained infinite heat as all the energy in the universe was concentrated in an infinitesimal point. But what that was actually like is inconceivable to us. In what sense (other than inconceivability) would absolute heat imply God? It may help us get round some very difficult physics, but in the sense that absolute is supposed to equal divine?
·         Secondly I think it is faulty to argue from conceptuality to actuality in this way. Believers can conceive with hindsight that God may be the absolute perfection from which all relative things came and to which they all aspire. But we can't ask others to make the same jump. Just being able to conceive of the perfect banoffee pie unfortunately doesn't make it exist. In essence this is the same fault that Aquinas himself found with Anselm's ontological argument. That we can form an idea of something doesn't imply its existence.

Next on the hit list is Aquinas' fifth way – the teleological argument. This is the argument that the universe exhibits purpose or design, and is probably the most controversial today. Obviously for an atheist to accept that the universe is designed is to have already conceded his position. He can appeal to several areas to help him. In some areas, the design appears to be perverse, for example parasitism. In others, the purpose appears to be incomprehensible – why billions of unreachable galaxies? Why a million species of beetle? In still others, there seems to be a huge amount of randomness, for example in quantum physics or possibly, at least for the present, the dark matter that is thought to comprise 85% of the universe. And finally the universe often exhibits processes where Aquinas saw purposes – natural selection say, or the gradual cooling of the universe after the big bang.

I think these problems have a lesson for believers as well as unbelievers. We need to show greater humility in the face of the great mysteries of the universe. It would be arrogant to suppose that the purpose of the vast tracts of space is entirely focussed on our doings on our little planet, or that we should be able to work out God's unfathomably deep purposes as if they were a Sudoku puzzle. And yes we do live in a different universe to Aquinas' Aristotelian and geocentric one. Perhaps the galaxies are there as a display of God's infinitely fertile creativity, of his majesty, or his infinity transposed into exceedingly large numbers – we don't know, we are just filled with awe.

So the teleological argument needs restatement. The statement I would choose is that the universe is intelligible. Somehow it is amenable to the numbers and words we humans supposedly evolved at random to make sense of our experiences when we moved from forest to savannah. Amazingly, it seems that the little pathways of electrons moving round in our brains actually do correspond to real things. There are logical laws to the way things happen, and without them the universe would collapse into chaos. At some level both we and the universe we are part of are rational.

However a little piece of logic called Ockham's razor comes to our aid here. William of Ockham held that in formulating explanations we should avoid the multiplication of entities: that is, if we have to fabricate a long chain of eventualities to explain something when a simple and direct explanation is available, we should prefer the straightforward solution.

To me the multiverse – the infinite number of dysfunctional universes – looks like the multiplication of entities. By their very nature as universes completely outside our own, we can never observe them or experiment on them or test their reality. These speculations have therefore ceased to be science, which is about the observable, the verifiable and the repeatable. In fact they are magic – everything's really caused by all these invisible powers…

In place of this factitious complexity we should prefer the direct and elegant explanation. The universe looks rational because it is rational. Whence then the rationality? In short, the teleological argument when suitably restated still provides strong grounds for the reasonableness of supposing that there is a rational mind at work in the way the universe is.

I have to admit though that I felt a bit bad rubbishing the multiverse in the paragraphs above. I actually think that if God is the kind of God who creates billions of galaxies and a million species of beetle, it would not be at all unlikely that He might create other universes too. As wise old Professor Kirke says in The Lion, the Witch and the Wardrobe, "nothing is more probable." What I would expect to find though, should any of them ever become amenable to our instruments, is that they too would exhibit rationality, beauty and sufficient order to enable them to keep going: a very different set of universes to the dysfunctional ones trapped in Brian Cox's Infinite Monkey Cage.

The other very intriguing thing to observe about the argument from intelligibility is that it puts a certain boot back on the right foot. Somehow or other we have come to swallow the secularising position that the more we understand about the universe, the less we need God. This view depends on the belief that people invented the gods to give explanations for the unknown, as in "What causes thunderstorms in the sky? It must be the thunder god!" However this is not what any of the great pioneering scientist thought. Like Copernicus, Newton, Mendel, Faraday, they were mostly believers. Instead of thinking they were invading God's space and squeezing Him out, they thought they were finding out about what God had done. "Thinking God's thoughts after Him," was Kepler's phrase. The argument from intelligibility expects that the more we know about the universe, the stronger our grounds for believing in God.

We've still got three more of Aquinas' Ways to explore: the First Mover, the First Cause and the Argument from Contingency. There is substantial common ground between them, so I'll discuss them all together in my next blog, Reasons for Believing (2). I hope you will agree with me that they provide further and indeed stronger support for the reasonableness of believing in a Creator God.

However there is only so far that Aquinas can take us. If we accept his arguments we end up with a Creator of all, a Mind on a supermassive scale, a Supreme Being rather like the one painted by William Blake below: but this is not enough. God so conceived very easily becomes an aridly intellectualised being, remote from us and right out of our league. So when I've finished looking at Aquinas I aim to move on to a key area for connecting with God, not merely hypothesizing about him: blog 3 will be I believe in God because I believe Jesus is His Son. The next blog after that will assert that I believe in God because through Him I can see life whole. This step enables us to move on to the way we live our own lives in relationship with God. In the last post I'm planning to cover as my fifth Reason for Believing the inadequacy of the alternatives. This will also give us space to reflect on where our society is going and what it needs to flourish.

It all looks terribly ambitious. I hope I'm up to it… Comments welcome! 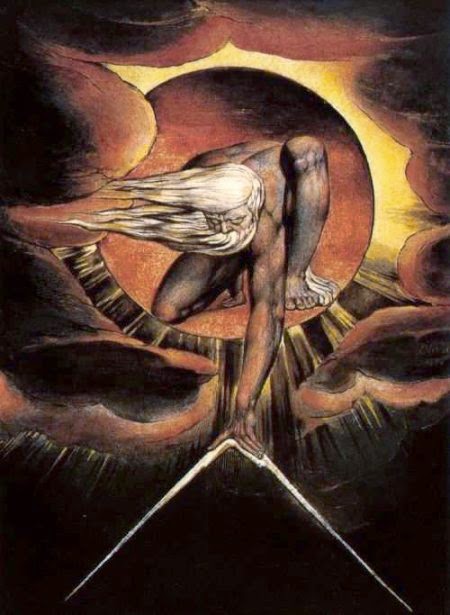 That's a lot to think about!