Thank you everyone for a truly uplifting celebration! Both churches were ablaze with Easter flowers and enjoyed good attendances with a number of visitors. Horton had a beautiful Easter Garden, St Andrew's had an Easter egg hunt with the children, St Michael's had Kathy enthusing about the Moving On course, Wraysbury had the band with Becky leading the singing. I was once told off for not making my Easter service joyful enough. That has stayed with me and I have always aimed to make joy a keynote every Easter since. And it was your joy, your enthusiastic response to the risen Lord, that made this Easter special for me.

In both churches we reflected on the story of Mary in the garden, caught unawares by a person she took to be the gardener when she had come to mourn the death of her crucified Lord. The story is in John's Gospel chapter 20. We used the picture below, on screen in Wraysbury and on little cards in St Michael's. I thought you might like another look, especially if your card was a bit fuzzy at Horton or you were sat a bit far away at St Andrew's.

So here it is: Rembrandt's The Risen Christ Appearing to Mary Magdalen, painted in 1638. The original hangs in the Queen's collection at Buckingham Palace. For a closer view, try Rembrandt - the Risen Christ appears to Mary 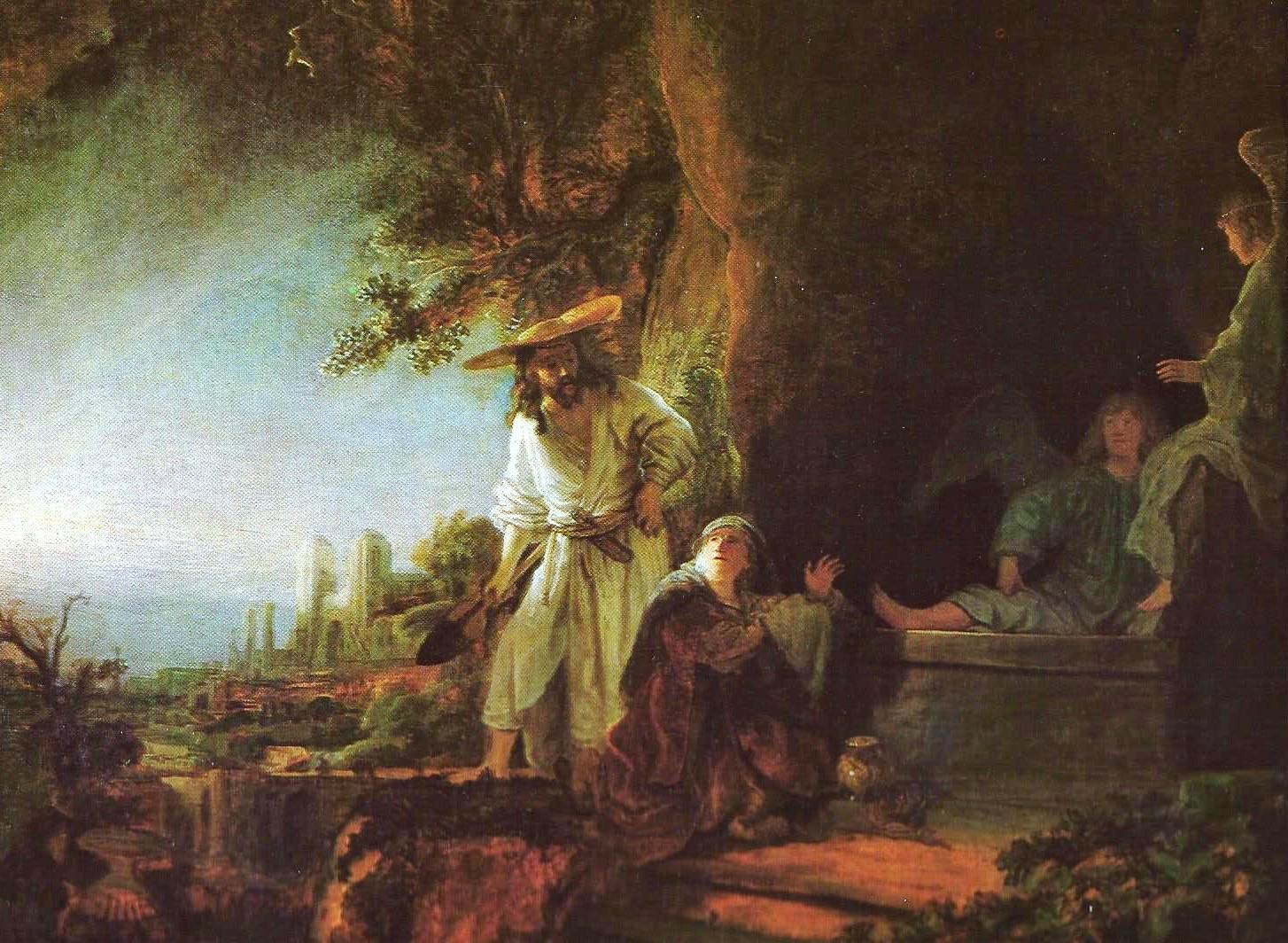 Rembrandt has packed a lot into his telling of the story:
·         The jar by Mary's knee reminds us that she had come to anoint Jesus' body in the customary way. There hadn't been time on Good Friday because the sunset that heralded Passover, the holiest Sabbath of the Jewish year, was just moments away.
·         Everything about Mary indicates that she has been completely focussed on death. She kneels at the tomb, reaching out her hands to where Jesus is supposed to be lying. She must have been thinking, "Couldn't they even leave his body alone? Haven't they done enough to him?" She hears a stranger come up behind her and demands to be told if he knows where they have taken Jesus. But it's so embarrassing - she's crying her eyes out: so she has kept her face turned away – until now!
·         The facial expressions are genius! Mary is in the act of realising who it is that has come upon her – amazement, shock, bewilderment. Jesus looks down upon her with compassion, understanding and, dare I say it, a twinkle of humour in his eyes, complemented by his relaxed, hand on hip stance. One of the angels sprawling on the tomb does that "eyes up" expression: "She's got it at last!"
·         Rembrandt uses the rock wall of the tomb to divide his composition firmly into two parts. One half is all darkness and gloom, the other is filled with light. One side is death, the other is new life and hope. Jesus is the brightest object, picked out in his white robe by the sunrise. He forms literally the turning point between darkness and light, as Mary turns her face towards him and towards the sunrise. Jesus' whole posture invites her to come and share in the light.

There is something very personal about this story. Jesus hasn't only come back to win a victory over death, to demonstrate the grand theology of redemption, to become a figure of universal salvation, vital as all those things are. According to Rembrandt, and surely according to John's Gospel too, it's much more personal. He's come back for Mary. He says her name, and that is the overpowering moment of realisation – "It's you!"

Isn't this true of all the resurrection stories? For Thomas: "Here are my hands that you wanted to see, here's the wound in my side." For Peter, who denied him three times: "Do you really love me more than these?" For two disciples trudging wearily back home, thinking it was all over… Jesus came back for each one of them individually, knowing their heartache and their issues. He came back because he wanted to be with his friends.

And that's true today. He's still the Risen Lord, he's alive, he still knows the things that wear us down or challenge us, our bafflement and our sorrow. He is still the turning point between a life circumscribed by darkness and death and the light of resurrection life. He wants to come to us as he did to Mary and Peter and Thomas.

He speaks our name. Are we listening?
Posted by Colin Gibson at Tuesday, April 07, 2015

Sorry I missed it

The wonderful spirit of faith and fellowship during Holy Week was truly amazing!!