Jesus said, "The Kingdom of Heaven is like a treasure that a man discovered hidden in a field. In his excitement, he hid it again and sold everything he owned to get enough money to buy the field -- and to get the treasure, too!" Matthew 13:44

Two pirates met after many years at sea. One seemed none the worse for his many adventures, but the other had a wooden leg, a hook instead of a hand, and an eye-patch.

"Whatever happened to your leg mate?" the first pirate asked. "Arrrr, well you see, we were in this sea battle. Along comes a cannonball and takes me leg clean off. Luckily we got a great ship's surgeon and he kitted me out wi this peg-leg, good as new!"

"All right then, but what about your hand? How'd you get that hook?"  "Ah-harrr! We were in a fight in a tavern, along comes a sailor with a cutlass and hacks me hand clean off! Lucky again there, the surgeon gave me this hook and pretty good it is too!"

"Well, what about your eye then, me hearty?" Arrr-ha-harr! We were sailing along as sweet as you please, when along comes a seagull and poops right in me eye!"

Why have a pirate joke when talking about the Gospel? What has last Sunday's reading got to do with pirates? Well of course it's because pirates hunt for buried treasure. In his parable, Jesus said that the kingdom of heaven is like treasure buried in a field. One day someone discovered it there, and was so keen to get the treasure that he sold everything he had to buy the field.

What does this tell us about the kingdom? That the greatest treasure we can find is to know God and enjoy his love. And it tells us what we need to find that treasure trove too… We need three things to find it, mostly beginning with "M." So all aboard me hearties, let's go in search of hidden treasure!

Motivation. A few years ago a hoard of exquisite Saxon jewellery was found near where I used to live in Walsall. Remember the Staffordshire Hoard? The guy who found  didn't just stumble across it by accident! No, he went searching regularly with his metal detector and finally came across something worth all those hours. In the same way we ought to be motivated to find out what life is all about, what is our destiny, is there a God, what happens after we die – all the big questions of the kingdom. Because God says, "You will seek me, and you will find me, if you seek with all your heart." Why should God share His Kingdom with people who are not really bothered? Johnny Depp in Pirates of the Caribbean had a special compass that showed him what direction to find his heart's desire – the treasure. 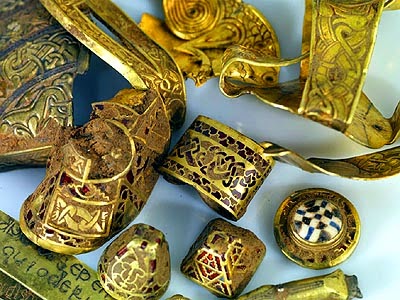 Map: Of course all pirates have a map to tell them where to look on that desert island. Our map is God's word. It may be that we hear it from somebody who tells us how to draw closer to God. It may be that we tell somebody else about the treasure we have found. These are important parts of sharing God's word as we live it. But in the end it goes back to the Bible. Here it is that we find all we know about God's promises, His provision for our salvation, His forgiveness and His amazing love. The Bible is God's Map for our treasure trove.

X Marks the Spot: For Christians we want to draw the X like this: +. Because the Cross of Jesus shows us where that treasure is to be found. It is when we come to the Cross that we receive God's forgiveness, that we are reconciled to Him, that we enter His presence and become inheritors of eternal life. If we don't come to the Cross but try to get the treasure in some other place, we will come home empty handed – because the Cross marks the place where that treasure is to be found. 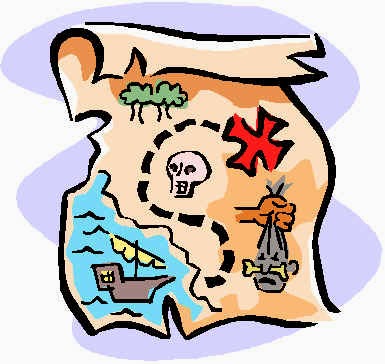 But interestingly we also need an X to mark where we are. When I went to Finland this summer there were maps put up in public places to show the way round. Unfortunately in one of them somebody had removed the sticker which showed "Olet tässä" - you are here. Without knowing where you are, the map is meaningless! In the same way, we must be honest with God about where we are if we are to receive His treasure. If we pretend that we are holy enough already, that we are doing God a favour by coming to Him, that we have somehow earned His love by our own efforts, we are not being honest. Because the Cross says that we all stand in need of mercy and forgiveness, that we are far from Him and that we can't draw near without God's help.

Conclusion: But that X also says something else – that however desperately we need God's mercy and help, He is even more willing to give it – so willing He even gave Himself for us on the Cross. Because this is one of those strange parables that we can take in two ways. Yes it is saying that God should be our treasure, the one who is worth so much to us that we would gladly lay down all that we have and our to have Him in our lives. But surely it is also saying that we are His treasure. Isn't He the one who in Jesus came to seek for us, and sought with all His heart: and when He found us, He gave everything to have us, just as the man in the story gave all he had to but the field: He gave His everything on the Cross, even laying down His own life so that we could be His. So brothers and sisters, we are His treasure. We are of infinite worth in His sight. Let's let His infinite love for us motivate us to seek to love Him with all our heart. 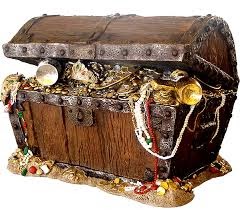 A lovely sermon, thank you for sharing it here x