Holmes and Watson consider their most baffling case...

Thanks everyone who said nice things about the Holmes and Watson sketch on at the New Life service in At Andrew's on Sunday. Here's the script if you want to follow the great detective's investigations again. If you want to check out more evidence for the resurrection, you could have a look at Who moved the stone? by Frank Morrison, The case against Christ (some statements for the defence) by John Young, or just Google evidence for the resurrection.


Well Holmes I don't like this case one little bit

This investigation! The Alpha police have asked us to find out if somebody rose from the dead! It's absurd! What are they up to?

I don't see what's so absurd about it, Watson.

O come now, Holmes! You can't prove that somebody rose from the dead, can you? I mean, it just doesn't happen, does it? You don't need to be a medical man like me to know that. I'm sure this Jesus of Nazareth was a very special person but – rising from the dead? Come off it!

Just take us through the facts. What do we already know about him, Watson?

Well… We know that he lived. I checked it all out with that nice Nicky Gumbel. Loads of evidence, loads of eye-witnesses, no doubt about it whatsoever.

And we know that He was crucified. All took place in public, hundreds of people there, the Roman governor, the chief priests, King Herod, everyone who was anyone involved in it…

So that's it – end of story. No-one comes down from one of those Roman crosses alive. This whole case is just a sick joke if you ask me.

Remember Watson, when all other possibilities have been eliminated, whatever remains, however improbable, must be the truth. So let's go through all the possibilities and see if any can be eliminated.

Right… Well, suppose Jesus didn't really die on that cross after all. Supposed he just fainted, from the shock and the pain. They put him in a nice cool tomb - after a few hours he comes round - he comes out of the tomb and - hey presto!

You're a medical man, what do you think?

Absolutely impossible Holmes! Crucifixion rips you to pieces! There's no record of anyone else surviving it. They even stabbed him to make sure he was dead. And if he did come round in the tomb, there's no way he'd be able roll back the stone that covered it. Have you seen those things? They weigh tons! And he'd be so battered there'd be no way whatsoever that anyone who saw him could imagine for one second that he had just conquered death!

Excellent Watson. Consider that possibility eliminated. Any other suggestions?

H'm. Well, suppose his followers went a bit hysterical. They were into all this faith malarkey, so they'd believe anything. They so didn't want to think he was dead, so they… hallucinated. Yes, that's it! They couldn't accept their great leader was dead! They wanted to believe he was alive so badly that they made themselves see him!

Interesting… Have you come across cases like this before Watson? In your medical career? Mass Psychosis? A whole lot of mad people who all see the same thing at the same time?

In fact all the evidence shows that his followers didn't expect him to come back. The first visitors to his tomb brought spices for his burial – they believed there was a dead body in there. Some of them weren't even sure they wanted him back. They'd betrayed him, run away in his hour of need… Their morale was broken.

All right then Holmes, so that one doesn't hold water either. But what about this? Perfectly simple. Somebody stole his body – and that's how the story got about that Jesus is alive.

And just who would that be, Watson? Who could have stolen the body of Jesus?

His followers of course. They announce Jesus has risen from the dead, they hide his body so nobody can contradict them, then they get to start a new religion and pull in lots of believers, influence, fame…

Sometimes I despair. Haven't you followed any of this case at all, Watson? Don't you know what happened to those followers? They risked their lives for their beliefs. Many of them were killed for their faith in Jesus. The only reason they were ready to lay down their lives for Jesus was because they believed he had conquered death. How could they possibly do that if they knew they'd faked it all themselves?

Well it needn't have been them, need it? It could have been the priests, or the Romans… That's it! I bet they were worried that the grave of Jesus would get turned into a shrine. Lots of people would come and make a martyr of him – there'd be so much trouble they had to stop it! So they just took the body!

Think, man, think! What's the one thing worse than having a dead Jesus turned into a martyr? It's having a living Jesus who's risen from the dead! If you are one of Jesus' enemies, and you've got his body, and you've got rumours flying around that he's come back, what's the first thing you're going to do? You're going to get his body out, aren't you? "Look, here he is, here's your Jesus! Doesn't look very resurrected, does he?" If they had his body, why didn't they do it? There's only one explanation. Neither the followers of Jesus nor his enemies had his body.

But Holmes, if his enemies don't have his body, and neither do his friends, then where is it?

All other possibilities have been eliminated Watson.

Only one explanation remains. Jesus Christ… is alive. 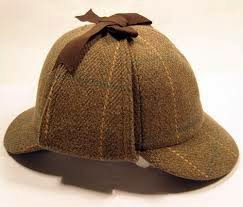 This was great when Colin and George acted it out at our confirmation course. A really fun and novel way to explain it all. ( They are both great actors too!)