Thank you Wraysbury for inspiring and moving Remembrance Service today. People told me that there is strong attendance every year, and they weren't wrong! It was particularly poignant to see so many children taking part and placing poppies round the Millenium Stone. We all long and hope that our children will never need to face the same terrors of war that our mothers and fathers endured.

I'm told the service up at Horton went well today too. Sorry I couldn't be with you on such an important day - vicars have many strange powers but they don't include being in two places at once. I know you were not short changed as you were led by my trusty colleague Beryl, who I know is a blessing to everyone in the parish.

Some people were kind enough to say nice things about the sermon today, so I promised to put it on the blog. And here it is...


I wonder who or what you think about during that two minutes' silence on Remembrance Sunday? I often think of my grandfather, Albert Taylor. Granddad was born into a very poor family. They were farm labourers in Norfolk with lots of kids. To survive, my granddad learned to live off the land. He knew which leaves and wild roots you could eat, and if there was a pheasant or rabbit anywhere in the landscape, he knew it was there. Ray Mears had nothing on him!

When he was only 16 Albert signed up to fight in the First World War. At the Battle of Cambrai, after initial British success, a German counter-offensive broke through. A small detachment was thrown forward to slow down the enemy so the rest of the troops could pull back to safety. This was called a sacrifice party – they put their lives on the line so their comrades could be saved. Only my granddad and one or two others from that party of over a hundred survived. Everyone else was killed.

Albert was taken prisoner and endured conditions of great hardship. Because of the British naval blockade, the Germans did not have enough food for their own people, let alone their prisoners. Granddad was assigned to an agricultural party, going into the fields to work the soil, as so many of the German men were at the front. One day he managed to escape, slipping away into the countryside. There he lived off the land, as he knew so well to do - those survival skills stood him in good stead. Moving by night and hiding up by day, he made his way to neutral Holland. There he was interned as a combatant for the rest of the war.

A sacrifice party… sacrifice is a universal human practice. The Old Testament Hebrews sacrificed, as did the surrounding pagans and classical Greece and Rome. There were the ghastly human sacrifices of the Aztecs and other South American peoples, but lest we think we Europeans are any better there were the mysterious sacrifices of the bog people in Europe. In China ritual sacrifices of burned paper objects are made to ancestors. Animists still offer sacrifices to placate angry gods and demons. Muslims were recently sacrificing sheep or goats at Eid.

Sacrifice is still alive in modern secular life. Athletes sacrifice a normal life to train: they would never have won all those medals in the London 2012 Olympics without huge sacrifices. Volunteers sacrifice their own comforts to help the poor - my own son Ben sacrificed a year of his young life to work with street kids in Bolivia last year. Leaders sacrifice their private lives for their goals… Business men risk their personal wealth and work all hours for their careers...

Closer to home, newlyweds sacrifice their way of life to adapt to their partner's. Parents sacrifice time, effort and money to bring up their kids, and later in life children do the same for their parents. Carers give up future prospects for those they love. Our churches would not continue without the sacrifices of the people who for love of God and His people give of their time, energy and money. Has any worthwhile thing ever been achieved without sacrifice? A world where no-one made sacrifices for others would be a diminished world full of petty people.

Sacrifice is everywhere! Why?

Christians believe it is because that is the way God is. "God is love," says the Bible. Then it tells us that His love is supremely demonstrated in the sacrifice Jesus made for us on the Cross. God is the kind of God who sacrifices Himself for those He loves – and He has made us in His image. No wonder sacrifice appeals to us, inspires us and moves us. It is the great theme of so many of our songs and stories. It fires our imagination and motivates our actions. It is at the heart of life.

In 1917 my granddad Albert laid his life on the line so that his comrades could be saved. And on the night before he died, Jesus shared a last meal together with his disciples. In words that have been used every Remembrance Sunday since it began, he said to them, "Greater love has no-one than this, to lay down his life for his friends." Then he made the Great Sacrifice: he went out to suffer and die on the cross. Jesus laid his own life on the line, so that we his friends could be saved... 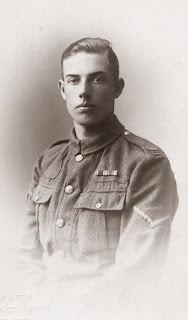 How wonderful to know what granddad did in the war, so many of us have no idea. Thank you for sharing