I'm a bit late posting this, it's been a really busy week. But last Sunday was St Michael's Day and I found myself preaching on St Michael in St Michael's Church in Horton. Megan was kind enough to ask for some notes of my talk, so I promised to put them here on my blog - thank you Megan!

I come across a lot of interest in angels as I wander about the parish these days. Could it be the same lonely impulse that makes us search the universe for life on alien planets? But Christians already know we are not alone in the universe. There is life out there – but not as we know it.

I think belief in angels is increasing because it's a no commitment religion. There's no cross, no challenge, no accountability to someone greater than yourself. Perhaps people like to cherry pick the plusses of having a presence to watch over them. But this low cost spirituality is not at all what the angels themselves are into, as we shall see.

By and large angels in the Bible are pretty mysterious. They take strange shapes – wheels full of eyes, mythological looking beasts with four heads, people with six wings or bodies like lightning. As spiritual beings this is probably not what they look like, just how they choose to make themselves known to people for whom they are otherwise invisible.

They are scary! The commonest reaction to angels in the Bible is the one in the Christmas carol, where it says "Fear not, said he, for mighty dread seized their troubled mind." Ezekiel and Daniel talk about their strength deserting them and trembling with fear when they encounter angels. These are not the fairies on top of your Christmas tree folks! They are mighty spiritual beings.

There's probably two good reasons why you haven't seen them very often (apart from their being invisible of course):
·         Perhaps it's not good for us to get too deeply involved with beings who are in so different a league to us – would it be a distraction from doing what God has called us to do as human beings? Or might we feel abashed and unworthy in the presence of such holy creatures?
·         it is possible even to fall into worshipping angels because of their awesome power and splendour. This is an absolute prohibition in the Bible – we should worship none but God.

Well, there are many kinds of angels – cherubim, seraphim (burning ones), thrones, dominions, powers. In spite of the complex angelologies some people have drawn up we really know very little about what these terms actually mean. But we are going to focus on the archangel Michael today, because we're in St Michael's church and it is St Michael's day. Michael is an archangel – that is a "prime" angel in both senses of the English word, first in time and first in rank. There are three other archangels in our traditions – Gabriel, Uriel and Raphael. However only Gabriel and Michael are named in the Bible itself.

Michael has five mentions in Scripture:
·         Daniel 10 x2 – Michael combats the mysterious "Prince of Persia" who seems to be some sort of cosmic evil being who inspires the Persians in their then conquest of the known world
·         Daniel 12 – Michael arises in the last days as the great prince who protects the people of Israel
·         Jude – Michael contests with Satan over the body of Moses after his death
·         Revelation – Michael leads the armies of heaven in war on Satan and his fallen angels

The common thread here is combat! That's why Michael is nearly always portrayed in armour – see our lady chapel reredos, picture below: or Epstein's Coventry cathedral statue. Michael leads heaven's charge against the powers of evil.


Michael's very name means, "Who is like God?" It's an exclamation of praise.So if you want St Michael's church, or St Andrew's, or any church, or any place, to be infested with angels, worship God with all your heart. Because they love an atmosphere of praise. It's what they live and breathe. If there's one thing above all we should learn from the angels, it's to join with them in worshipping our amazing God. 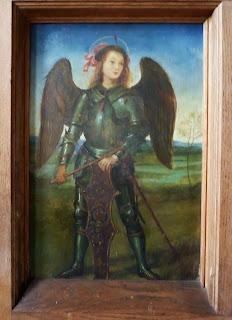 Thank you. Lovely to know more about our church's name. I wonder who chose the name, and why?

That is very interesting Colin. Isn't it odd how we're brought up believing in angels as being sweet little boys and girls in white with wings and haloes, when the Bible clearly shows them as dread beasts, monsters or mighty warriors? I can only conclude that the truth was deemed too scary for kids. Even as an adult I find the book of revelation pretty terrifying and hard to understand.

Among us motorcyclists a common saying is "never ride faster than your guardian Angel can fly". German bikers have the same saying. I always imagine my biker friends who have died flying along behind me. That's not quite the idea of angels in the Bible, but I can't help but think that if we're resurrected then surely we'd look out for our earthly friends.